Shake Shack originated in Madison Square, NY starting in a road side hot dog cart. After becoming a success, it reopened during the summers of 2002 and 2004 before gaining a permanent kiosk in 2004. Success spread and Shake Shack launched over 26 kiosks in America. The franchise spread to the Middle East and Turkey before coming to the UK. I was eager to check out this new restaurant which opened in the UK only 5 weeks ago, situated in Covent Garden.

At first glance of Shake Shack gave off a positive, summer vibe, the kind of place you would go for a quick lunch with friends while enjoying the sights of Covent Garden.

I was met by the friendly face of the manager David who quickly got me seated. David informed me that I had arrived at a brilliant time as the queues are usually very lengthy ranging for a 30 minute to an hour wait. My first thought was “this must be some seriously bloody good food.” As a reviewer, I felt it was necessary to sample a wide breadth of the menu in order to be able to review effectively. I trusted David to pick the selection; after all, he does know the menu better than me. When David told me that they weren’t strict with their menu, I realised at this point that Shake Shack take customer service very seriously. This was perfect as I requested my burger well done – I’m not an advocate of sanguinarnian vampirism.

As I waited in anticipation, I was served with Shake Shack’s very own hand-spun vanilla milkshake. I’d like to think of myself as a milkshake connoisseur – I know a good milkshake when I taste one. This didn’t disappoint. The milk used was very fresh which gave the milkshake an overall professionally handmade sapor which I thoroughly enjoyed. With milkshakes, consistency is important. It cannot be too thick that your pucker face is in full throttle and cannot be too watered down that it tastes like water. This was the right consistency, unlike milkshakes from most fast food restaurants, I was able to enjoy my milkshake without fearing it would becoming watery quickly.

David spoilt me with an assortment of dishes. Crinkled fries, cheesy fries, a ShakeMeister sausage hot dog, a ‘Shroom burger and a ShackBurger. Generally, fast food burgers tend to be sloppy when it comes to presentation with beaten looking buns and expiring lettuce – not at Shake Shack. I was presented with a tray with burgers enveloped by paper bags, a hot dog in a cardboard hotdog box, disposal cutlery and a choice of dips, all in true American cafeteria style.

The first bite of the ShackBurger and it dawned on me why so many people seem to love Shake Shack. The tomato and lettuce were tucked neatly and restored my faith in fast food burger exhibition. The Aberdeen Angus beef was cooked precisely as requested, although there is a tendency for well done meat to be dry, this wasn’t evident. The succulence of the beef combined with the Shack sauce, lettuce, tomato and the softness of bun was a mouth watering experience.

I am a self confessed carbohydrate addict and my needs were met. The crinkled cut chips were slightly crispy with a dash of salt, just enough to savour the side dish but not enough to raise blood pressure levels. When it comes to food, I’m a texture enthusiast as I am certain it adds more depth to the gusto of the meal. A healthy dollop of ketchup and I was a happy woman.

Unfortunately, the cheesy fries didn’t tickle my fancy purely because I’m not a fan of cheese, particularly cheddar cheese because of its pungent after taste. However, if you’re a cheese fanatic I would definitely recommend ordering this.

The hot dogs I have previously sampled are usually made with cheap tasting, almost plastic meat so I usually steer clear of them. I can proudly that Shake Shack’s ShackMeister Sausage hot dog has completely changed my outlook. I was treated to a delectable pork hot dog bursting with flavoursome juice, the icing on the cake were the marinated shallots.

Penultimately was the vegetarian option – the ‘Shroom burger. Crispy fried Portobello mushroom with melted cheese, lettuce, tomato and shack sauce. Sadly it was a combination of two foods I hate – mushrooms and cheese which had a distinctive onion taste that was too sharp pour moi.

David gave me a tour and enlightened me to the fact that they had invested in over 200 umbrellas for customers in the queue because of England’s unpredictable weather. I became acquainted with some of the staff and was impressed by the cultural diversity with employees from America to Dubai. A great microcosm of London’s population. I finished off with a Drury Lane Jam concrete (the name scared me too) a “frozen custard ice cream blended at high speed with mix-ins”. This consisted of vanilla custard, local strawberry jam, St John bakery brown sugar biscuit and fresh banana. Although I love bananas, banana ice cream doesn’t tickle my fancy, but this wasn’t too overwhelming, the biscuit was a sweet addition though slightly stale. My only wish is that the vanilla custard was more prominent.

Conclusively, I had a positive Shake Shack experience, the intimacy, friendly staff and of course the food. They even offer dog treats! Don’t be deceived by the small portions, it may not be as gargantuan as American portions but it is very filling. Unquestionably I’m going to go extra hard with cardio this week. 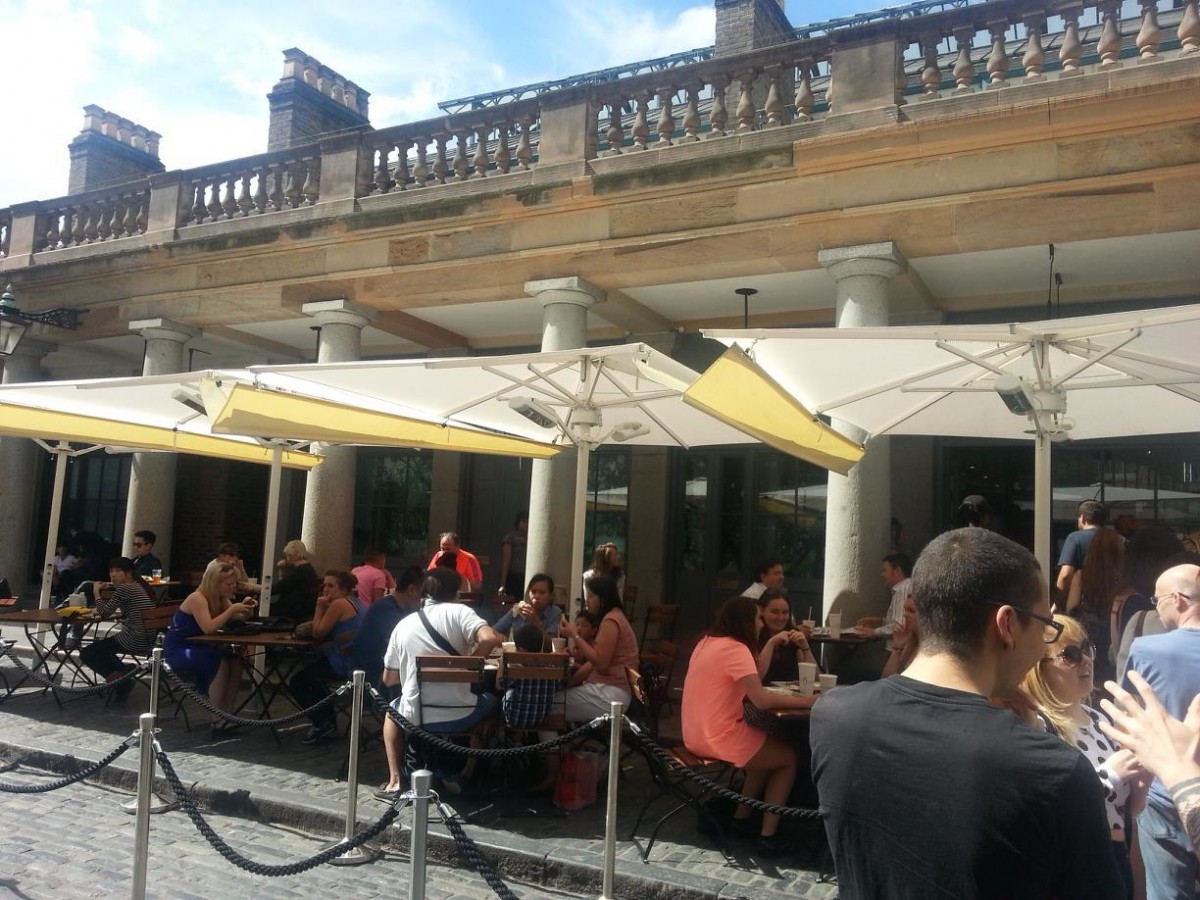 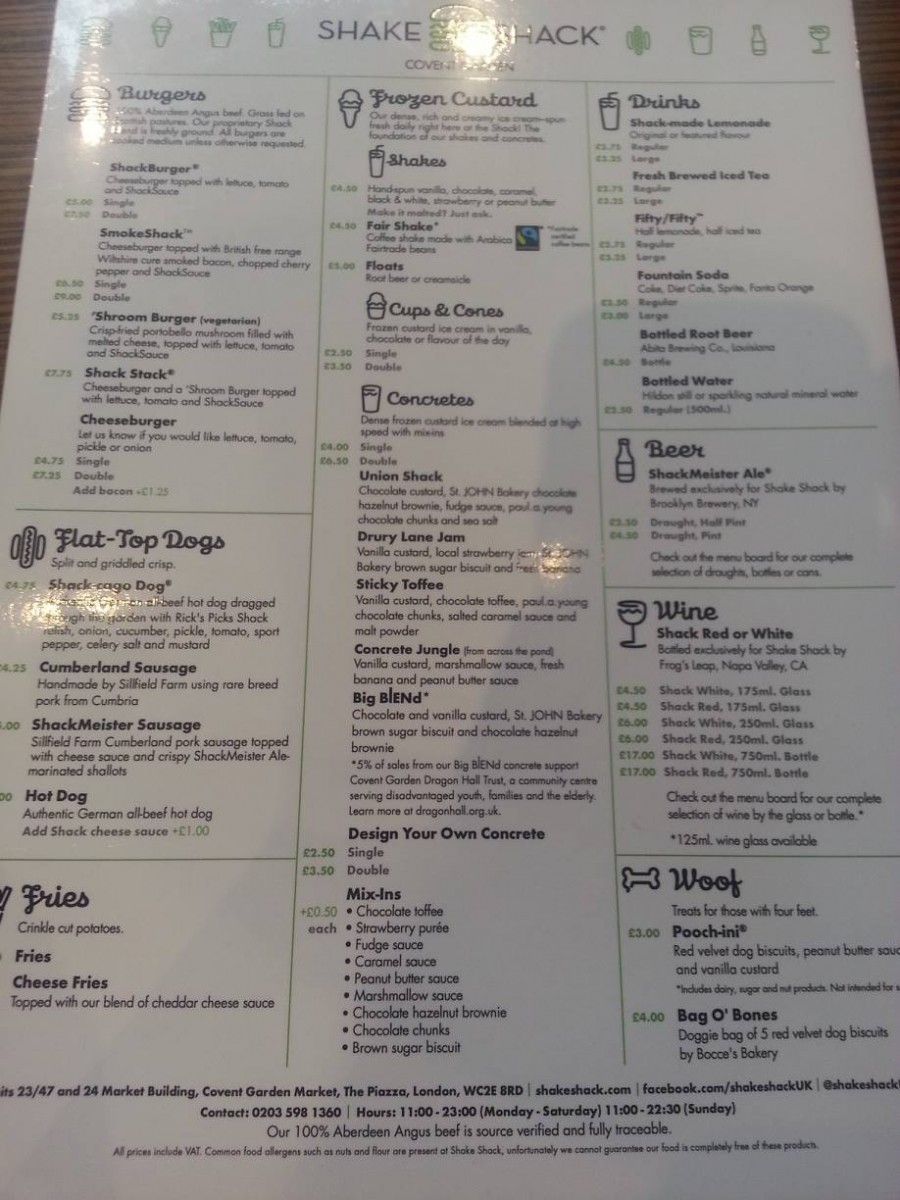 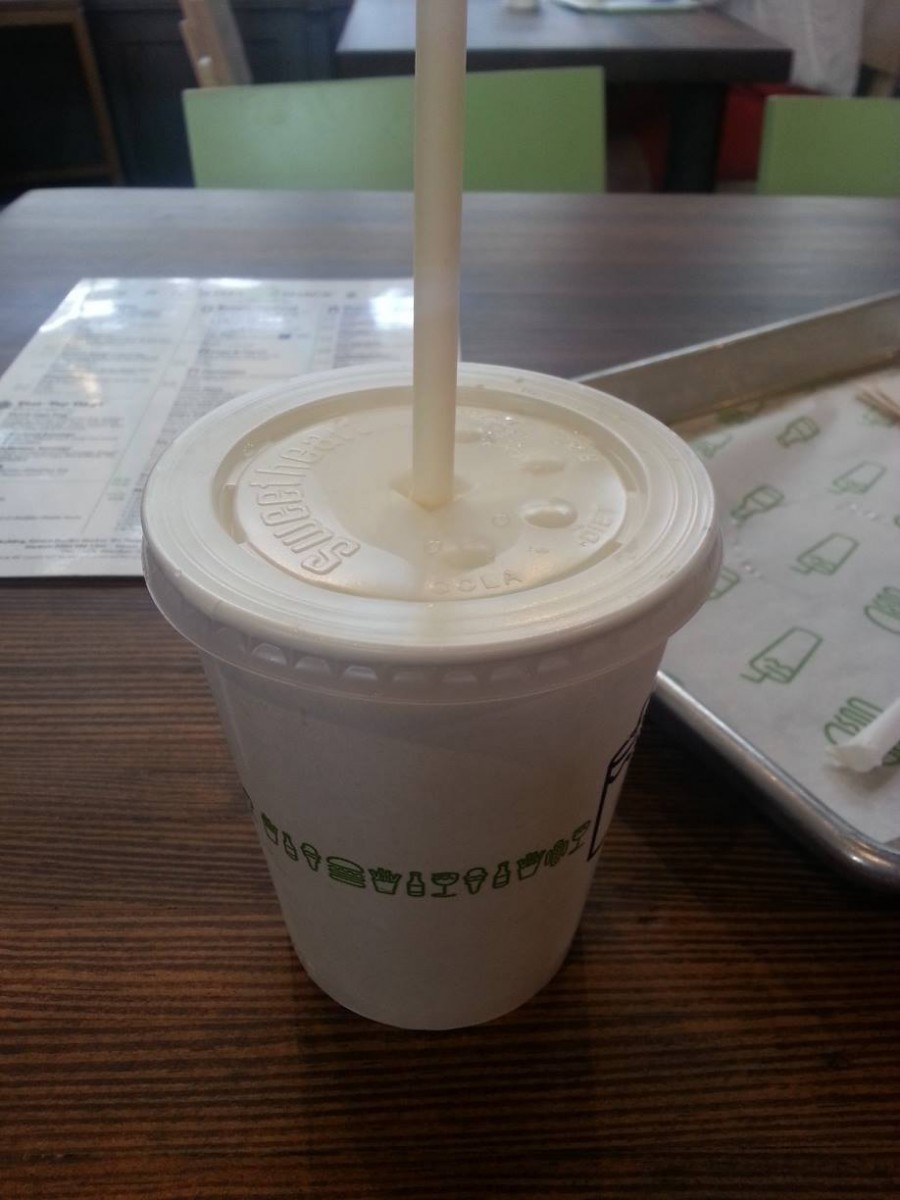 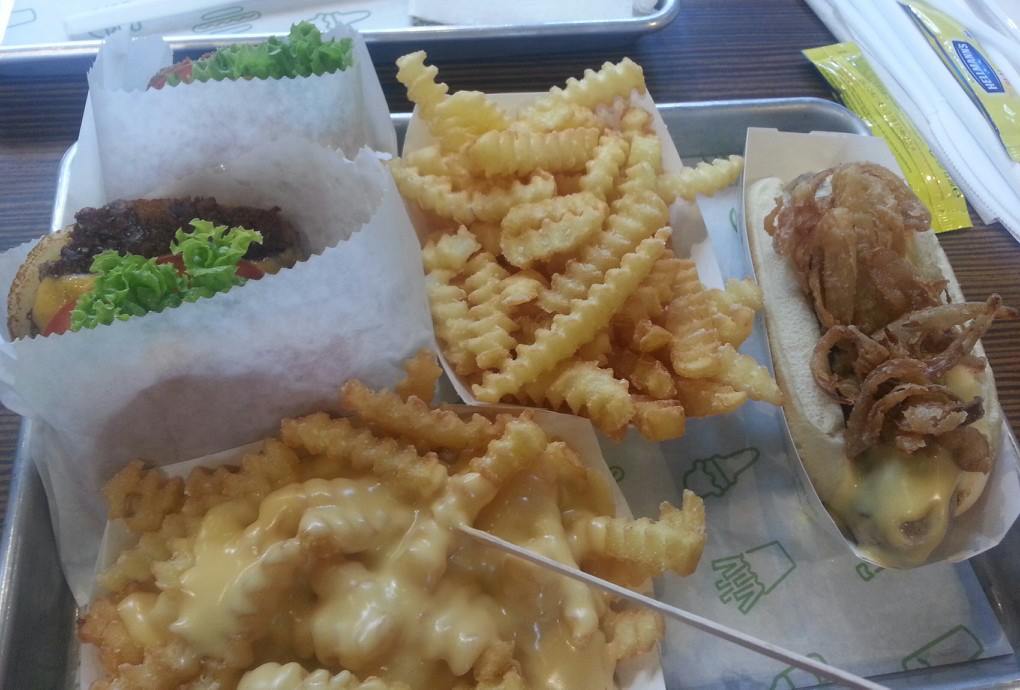 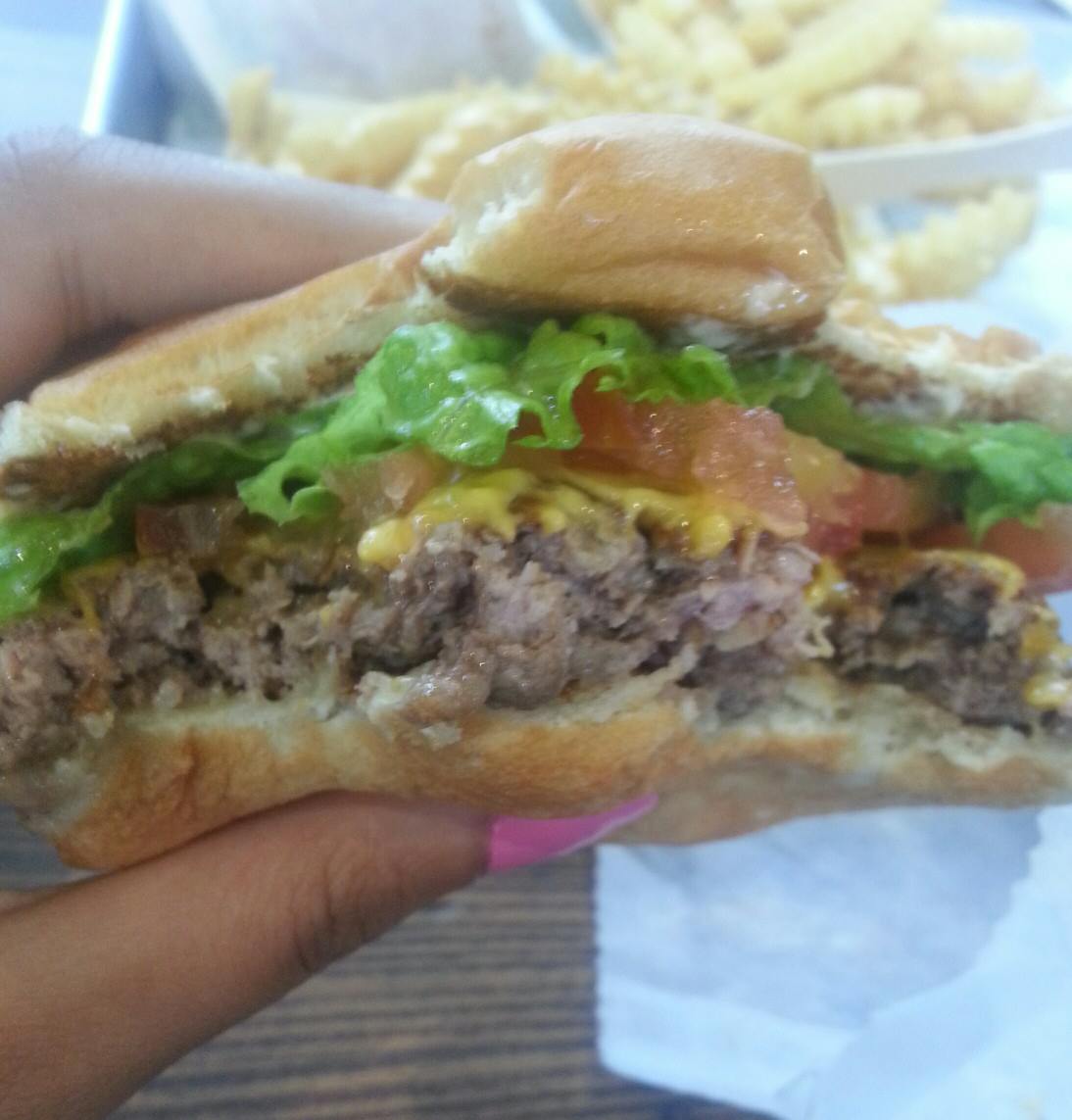 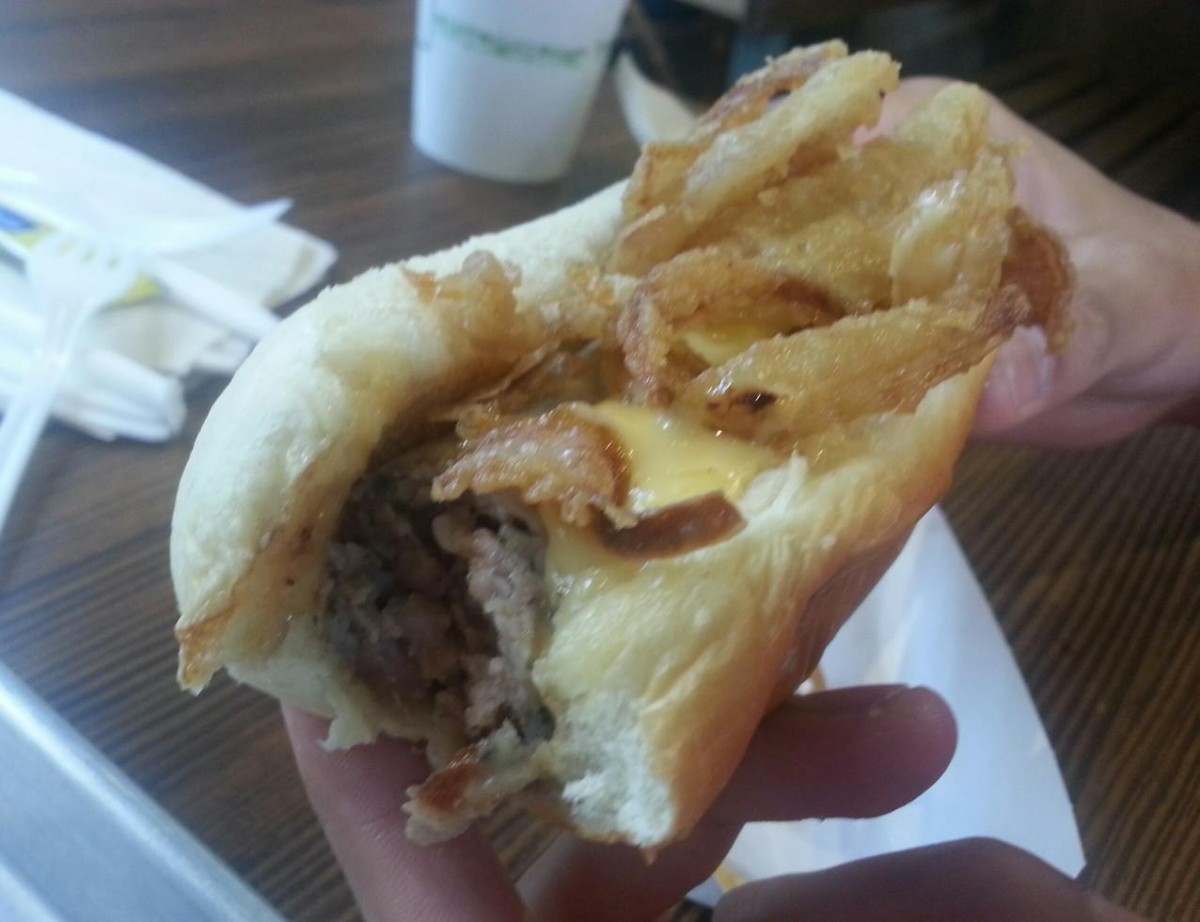 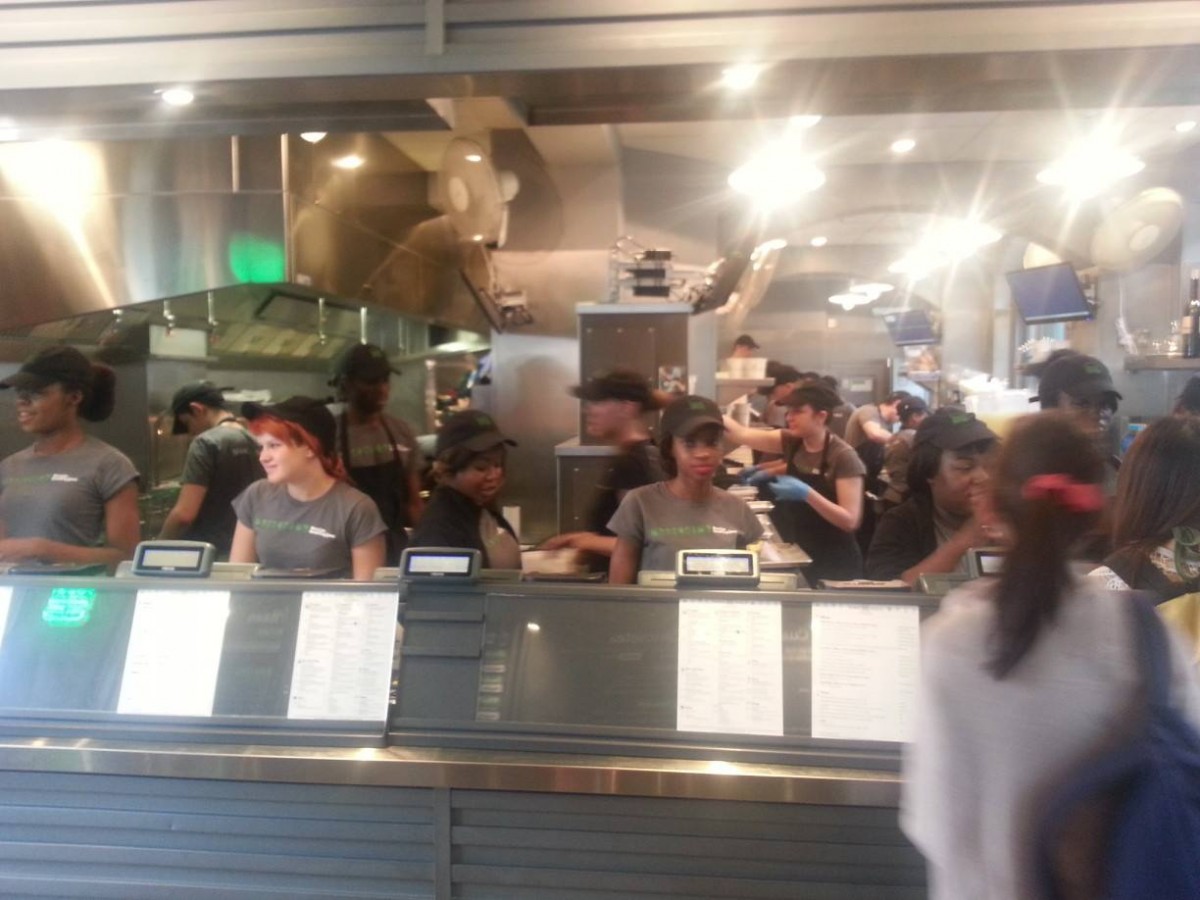 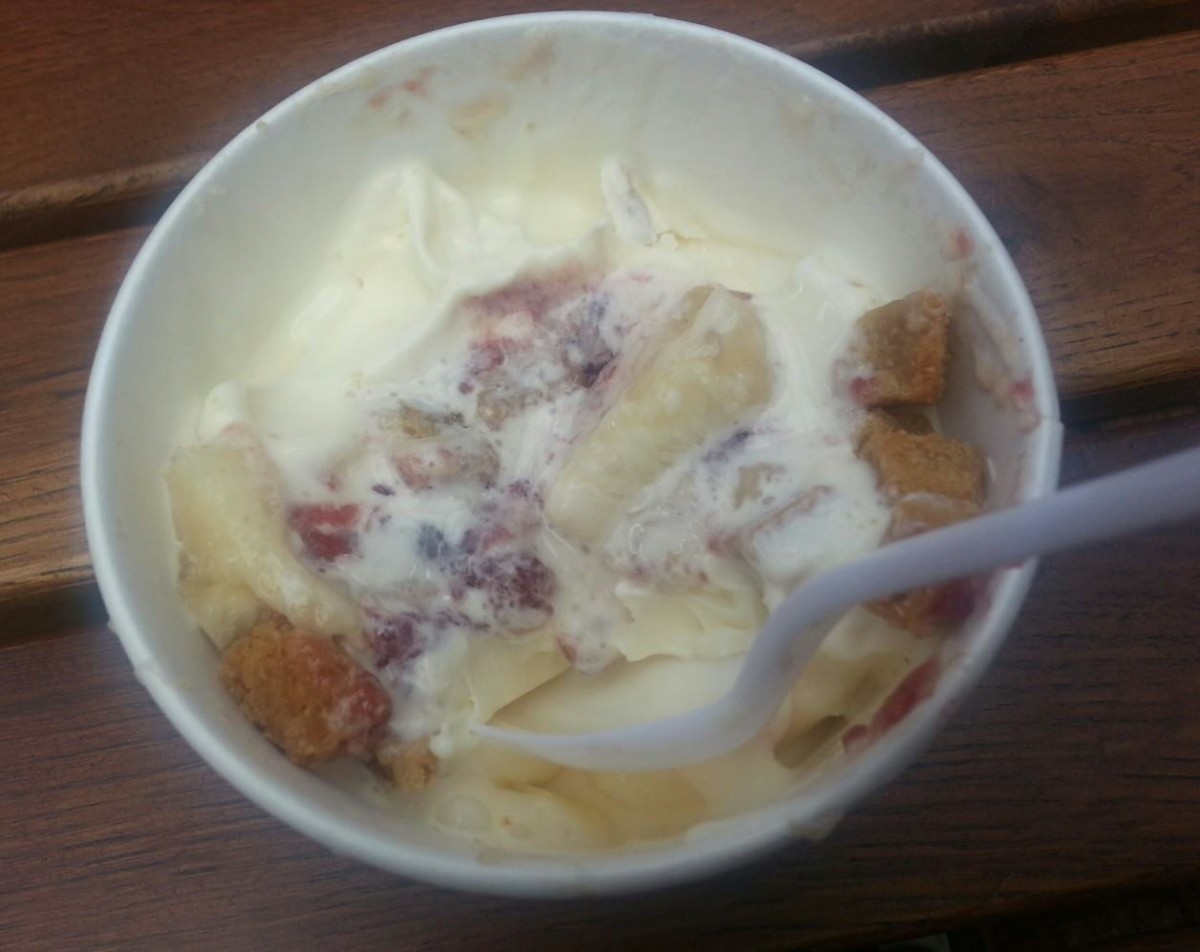 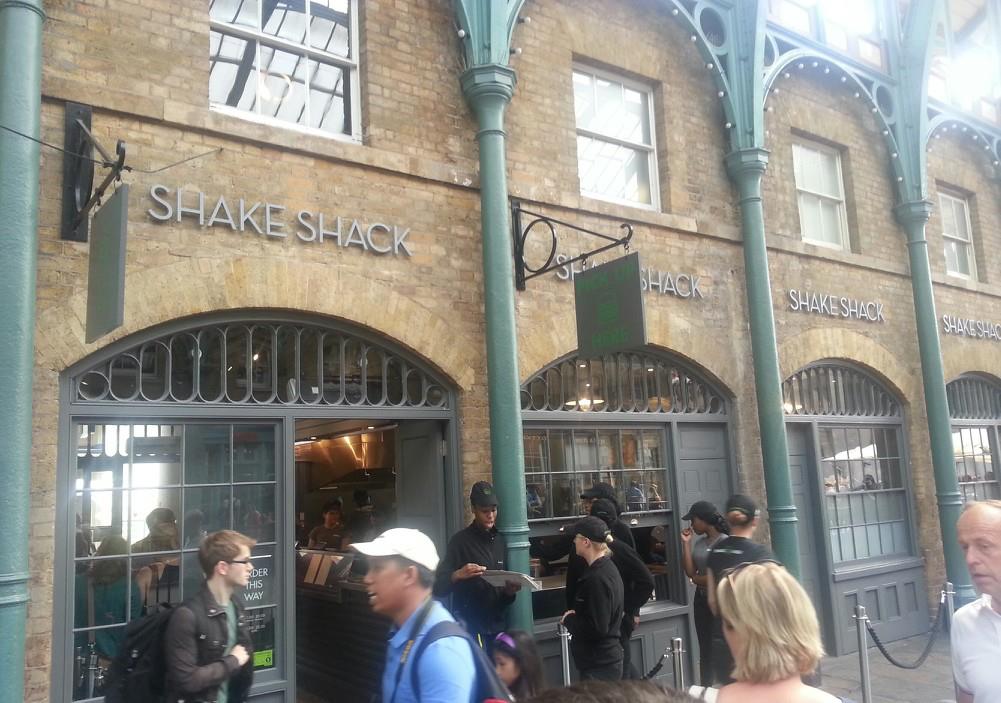